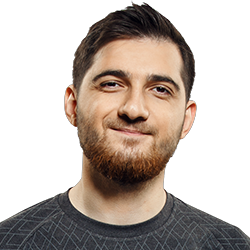 Vladimir «RodjER» Nikogosyan, an esports player in the Dota 2 discipline, was born on December 14, 1993. He made his first steps in competitive Dota back in 2013.

He began his career in 2013 with the Cleave Gaming team. In December 2013, at his first tournament, Vladimir took first place in the StarLadder ProSeries Season 8 tournament. In 2014, the player continued to play for Cleave Gaming, and also tried to qualify for The International for the Aware Gaming team, but to no avail. This year was not very successful for Vladimir, as the teams with his participation did not get above fifth place. In 2015, the player’s career began to decline. Vladimir took part in only three tournaments and two qualifications. In 2015, he replaced four teams, namely Power Rangers, Hard’N’Play, CIS Rejects, and Natus Vincere. But in February 2016, the player’s affairs began to improve. He joined the stable team of Prodota Gaming. In the same month, the team, with his participation, wins the ProDotA Cup Europe # 3 tournament. And next month, the team of Vladimir becomes the winner of the Dota 2 Stars Arena tournament. In August, the player joins the Flipsid3 Tactics team. In September, the team takes first place in the NVIDIA Dota 2 CIS Cup Series Grand Final # 8. In October, they also become winners in the Dota 2 Champions League Season 8 tournament. In November, Vladimir joined the Rebels team and showed an excellent game there, and helped the team win four of eight tournaments, namely Treasure Arena # 1, Dota 2 Danger Cup Season 1, AOC Dota 2 Cup, ProDotA Cup Europe # 13, Russian eSports Cup 2016. He also took second place with the team in the Dota 2 Champions League Season 9 and Royal Arena # 2. In early 2017, Vladimir transferred to the Effect team. As part of the team, another ProDotA Cup Europe # 14 tournament wins. After which, he was invited to the Team Empire. As part of this team, Vladimir becomes world-famous after the team took 7-8th place at The International 2017. But in September, Vladimir decided to go to the Natus Vincere organization on his own initiative. Vladimir played for Natus Vincere until the beginning of 2018. During this time with the team, he managed to win such tournaments as the Adrenaline Cyber ​​League, WESG 2017 Europe Finals and took fourth place in DreamLeague Season 8. In February 2018, Vladimir was invited to the Virtus.Pro team. And immediately, he becomes the winner of the ESL One Katowice 2018 tournament. In March, Vladimir and the team won at The Bucharest Major and World Electronic Sports Games 2017. Together with Virtus.Pro, Vladimir also took first place at ESL One Birmingham 2018, fourth place at EPICENTER XL, and second place in the China Dota2 Supermajor tournament. After a series of such victories, the team received a direct invitation to The International 2018. The team was then predicted to take first place, as the team showed an excellent level of play. But at The International 2018 tournament, the team took only 5-6 places.

Vladimir continued to perform with Virtus.Pro until August 2019, but after disappointing results at The International 2019, the organization decided to change the composition. As a result, Vladimir moved to the Winstrike team. Vladimir played for the new team until February 2020. During this period of time, the player managed to take part in four qualifications. Still, unfortunately, he did not pass one of them. At the beginning of 2020, namely at the end of February, the player joined the HellRaisers organization. With the team, Vladimir won the World Electronic Sports Games 2019 Russia Finals. Until July, Vladimir played at various Tier - 2,3 tournaments. But the player did not show good results there. It is worth noting the third place at the Parimatch League Season 2 tournament and the third at the Parimatch League Season 3. At the end of the summer, the team became inactive due to poor results. In turn, Vladimir moved to FlyToMoon, where he immediately helped win the OMEGA League: Europe Divine Division tournament, followed by the qualification for OGA Dota PIT S3: Europe / CIS. In September, the FlyToMoon team was signed by Natus Vincere. As part of which, until the end of 2020, Vladimir managed to show excellent results, namely, to take fourth place at OGA Dota PIT S3: Europe / CIS, second place at ESL One Germany 2020, and first place at OGA Dota PIT S4: Europe / CIS tournament. In total, Vladimir and his team have won more than $ 190,000 in prize money since September. .