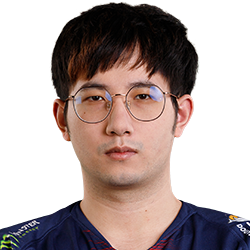 Xu «fy» Linsen is a Chinese eSports star. Born February 12, 1995. Despite its young age, «fy» has achieved tremendous success in e-sports. Xu is often called one of the best Rubik players in the world. And in a duet with his teammate, they with Fenrir were known as one of the best support duets and the foundation of the Vici Gaming team.

Xu first appeared as a player on the Vici Gaming team when the organization was just founded in October 2012. It was believed that it took many attempts to convince fy to come to VG, even though he had never played Dota 2 before. WarGod7 convinced him to join the team and eventually become a VG player. «fy» described his transition to Vici Gaming as «fate». In 2013, the organization did not show good results. The team could not win qualifications and go to such tournaments as G-League 2012: Season 2 and Dota 2 Super League. Also, the team could not qualify for The International 2013 tournament, losing to LGD. After such a failed season, Xu decided to leave the team. But as it later became known, the player did not terminate the contract and left the team without the consent of the organization’s management. As a result, he could not play for other teams until his contract expired. Despite all this, «fy» was determined to leave the team. But after a while, Xu apologized to the organization and decided to return to the team. But since some players chose to leave the organization, there were extreme changes. After several months of instability in the team, as the team was continually changing, the team had the opportunity to participate in the ESL Major Series One Fall Event, as Team DK could not get a visa. At this tournament, «fy» showed a fantastic game, and received the MVP of the tournament. 2014 was a very successful year for the team, as he received a direct invitation to The International 2014. Then Xu participated in his first The International tournament. The team took second place, but «fy» was not upset, and admitted that this was a great achievement in his career. With the money won, Xu bought a house for his mother. After one of the team members left, «fy» became the team captain. Under his leadership, VG won the ESL One New York 2014 and The Summit 2.

In 2015, VG took second place at the Dota 2 Asia Championships and fourth at The International 2015. On March 19, 2016, «fy» was transferred to the second squad of Vici Gaming, Vici Gaming Reborn. He won his first tournament on this team, defeating Natus Vincere 3-1 at StarLadder Invitational 1. But in the future, the team failed and did not qualify for The International 2016. Then Xu returned to the main team. The team could not show good results for the year. The team held low places in tournaments and could not get to The International 2017. After unsatisfactory results, the «fy» team announced that it was leaving the organization after six years of successful collaboration. Then the player switched to another team in LGD. In the new team, «fy» tried his hand at a new position, but after another new player was taken into the team, Xu was forced to play his position again. After which the team won victories in tournaments such as MDL Changsha Major and EPICENTER XL. On the latter, he became MVP and received the glove of infinity. The team also successfully performed at The International 2018 and took second place there.

2019 was also quite successful for the player, in addition to prizes in various tournaments, he and the team took third place at The International 2019. Which is really a great achievement, since it took place in the player’s native country, China. At the beginning of 2020, Xu and his team showed good results. The player helped the team win at China Dota2 Professional League Season 1, China Dota2 Professional League Season 2, and ESL One Birmingham 2020 - Online: China. In September, the player left the PSG.LGD team. And in October, it was officially announced that the new Elephant team had signed a player. In the new team, Xu took first place at the China Dota2 Pro Cup Season 2 tournament and at the OGA Dota PIT S4: China tournament until the end of 2020. Also worth noting is second place in the CDA-FDC Professional Championship.

More popular than the Dust II map can only be the same, but in an updated form in Counter-Strike: Global Offensive. In CS GO, the Dust 2 map has a new design. Textures, objects and the external environment were worked out. But the overall game pattern has not changed. The location remains the same, albeit … END_OF_DOCUMENT_TOKEN_TO_BE_REPLACED

Counter-Strike: Global Offensive has a lot of customization options. Many beginners and even some professionals are interested in reducing the net graph so that it does not take up half the screen and does not interfere with using the necessary millimeters for shooting. Each player can change the size of the indicator and its place … END_OF_DOCUMENT_TOKEN_TO_BE_REPLACED

Esports fans are well aware of the possibilities of add-ons for the game. For example, the Dota Plus subscription is very popular among users. Thanks to her, gamers can: – Easy to navigate in the process of searching for characters. Tips are displayed on the screen, having received which, it is easier to choose the … END_OF_DOCUMENT_TOKEN_TO_BE_REPLACED

There are many different terms and actions in Dota 2 that seem outlandish at first. One of these puzzles is how to last hit your creeps and why do it? During training, each player must understand the primary rule of Dota 2: money can be obtained only after the complete destruction of the opponent. It … END_OF_DOCUMENT_TOKEN_TO_BE_REPLACED

Many players upgrade their Dota 2 MMR using different methods. Everyone tries to act honestly, occasionally resorting to donations – buying items and power-ups for real money. Dota 2 boost refers to the legal rank gain for winning an increased amount. This is an excellent option for improving results quickly, which cannot be said about … END_OF_DOCUMENT_TOKEN_TO_BE_REPLACED

In Dota 2, Roshan is one of the essential neutral creeps. If you kill him, you can get many experience, gold, and valuable resources. But the hero is powerful. It is challenging to cope with him alone. Next is the material that tells who Roshan is, where to find him, defeat him, and what items … END_OF_DOCUMENT_TOKEN_TO_BE_REPLACED

Counter-Strike: Global Offensive has a free flight feature that allows players to explore map features, look for bugs, look for interesting places for sniper ambushes and other tactics, or record video. But not everyone knows how to fly through walls in CS: GO because there is no such option in the public settings menus of … END_OF_DOCUMENT_TOKEN_TO_BE_REPLACED

Despite the fact that Dota is already an exciting esports discipline, it can be made even more gambling entertainment thanks to the prediction of victory. For example, at the start of a match in Dota 2 in the game chat, you can often see that one of the players predicted his future victory. Dota 2 … END_OF_DOCUMENT_TOKEN_TO_BE_REPLACED

This article will talk about what a Dota 2 bonus hero is. The most popular questions on the topic: What character pool does the bonus hero option imply? Bonus hero is selected from 10 options What bonus items come with it? Two free mangoes How to get a random hero? Using the Random Hero Button … END_OF_DOCUMENT_TOKEN_TO_BE_REPLACED